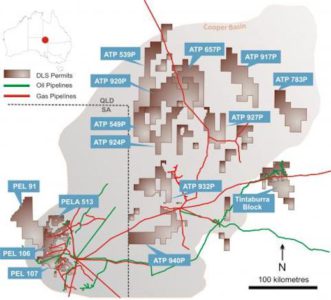 SYDNEY, March 17, 2015 – Drillsearch Energy announced on Monday the discovery of wet gas at PEL 513 on the Cooper Basin in Australia.

The Kyanite-1 exploration well at PEL 513 was drilled to a depth of 3,354 metres, with stacked reservoirs from the 250 to 3,795 total gas units identified at the Patchawarra and Tirrawarra Sandstone/Merrimelia Formations.

Preliminary interpretations of Drillsearch Energy’s wireline logs have confirmed an estimate of 24.2 meters of net conventional gas pay over several intervals at the Patchawarra Formation.

The discovery marked the fourth well out of five that was drilled by the joint venture company, which includes 60-percent shareholder and operator Santos and Drillsearch Energy, with the remaining shares in the company.

In December 2014, Drillsearch Energy announced its second wet gas discovery at PEL 513 with Santos, drilling to a depth of 3,142 metres at the Yarowinnie South-1 well, southwest of the Varanus South-1 well, which was discovered in November 2014.

“Kyanite-1 is Drillsearch Energy’s sixth wet gas discovery in the 2015 financial year, which represents an exceptional return from this year’s work programme,” Brad Lingo, the managing director of Drillsearch Energy, said in a statement.

Rosneft and Trafigura to enter into export deal
Next

Lifting US oil ban could create thousands of jobs