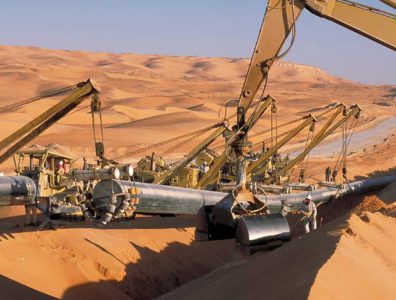 ALGIERS, March 8, 2016 – Sonatrach, Algeria’s government-owned oil and gas company, has said it would invest around USD 3.2 billion in pipelines and related infrastructure over the next four years.

Announced by Sonatrach vice-president for pipeline transportation Arbi Bey Slimane on Tuesday, the company’s plans are aimed at raising Algeria’s natural gas transportation capacity. Sonatrach has USD 530 million earmarked for investment in 2016, Reuters quoted Slimane as saying. “We will build 1,650 km of pipeline, and six compression and pumping stations by 2020,” he added.

The plans are part of an effort to counter Algeria’s stagnating hydrocarbons output in 2016, with Sonatrach CEO Amin Mazouzi vowing to pursue “a sizeable increase in production.” Targeting increased output from new and existing fields, Algeria is expected to start producing from seven fields between now and 2018, according to the Energy Information Agency. This includes the expansion of the Southern Fields project on the giant In Salah venture, operated by a joint venture between Sonatrach, BP and Statoil and signed off on by the government in February 2016.