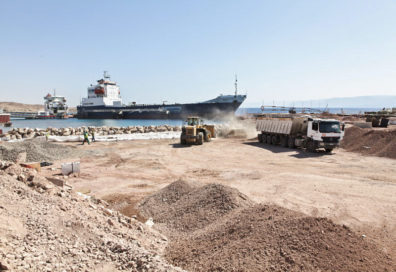 ABU DHABI, November 19, 2014 – Last Wednesday, Dutch contractor BAM International was awarded a $87.7-million contract by the Abu Dhabi Company for Onshore Oil Operations (ADCO) for the construction of the marine infrastructure of Phase three of the Al Dabb’iya oilfield development.

Incorporating five offshore clusters, the scope of work includes channel dredging, reclamation works, building of a causeway, shore protection, heliport, pontoons and fences. An additional offshore cluster comprising a boat quay, pontoon and heliport is also included in the scope of work. BAM International plans to complete the project by September 2015, with support from BAM Contractors of Ireland.

The Al Dabb’iya field, discovered in 1983, is part of the North East Bab asset, located 31 kilometres from the city of Abu Dhabi. The field’s output is to be upgraded from 72,000 barrels of oil per day to 145,000 barrels of oil per day by 2017 as part of Phase three of the North East Bab expansion project, which started in 2014.

Once Phase three is completed, the three North East Bab fields – Al Dabb’iya, Rumaitha and Shanayel – will contribute an additional 112,000 barrels of oil per day to ADCO’s total output.