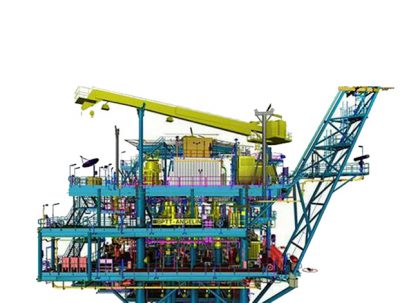 PORT OF SPAIN, August 3, 2018 – The topside and jacket for the offshore Angelin platform has arrived in Trinidad and Tobago, super-major BP said in a company statement on Thursday.

Both pieces of infrastructure were constructed by McDermott in Altamira, Mexico, and set sail for the island nation on June 30. BP said it would install the platform over the following weeks at the Angelin field in 65 metres of water.

Located 60 kilometres offshore southeastern Trinidad, Angelin is expected to produce first gas in Q1 2019. The development entails the drilling of four wells, with the aim of producing 17 mcm (600 mcf) of gas per day. Angelin’s output will be sent to the company’s Serette platform through a 21-kilometre pipeline.

“Angelin is part of BPTT’s long-term plan to develop its resources in the Columbus Basin and the development underscores BPTT’s commitment to Trinidad and Tobago,” Claire Fitzpatrick, the super-major’s regional president, said in the statement. “The safe arrival of the jacket and topsides is an important milestone, and we are now focusing on the next stages of the project as we progress towards first gas in 2019.”