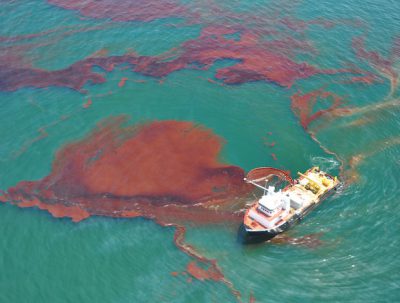 “The pipe was found … in a broken condition. There were external factors that caused that,” Togar MP, the general manager of Pertamina’s refinery in Balikpapan, was quoted as saying by Reuters. “We are still calculating the volume of the leak and losses.”

The cause of the leak is unclear. Pertamina has said initial testing showed the substance was marine oil.

At least four people have been killed in the oil spill and subsequent fire, and the city of Balikpapan declared a state of emergency on Monday. The Semayang Port Authority is working with Chevron Indonesia and Pertamina to clean up the spill, which has been contained by booms and sprayed with chemicals to facilitate recovery.