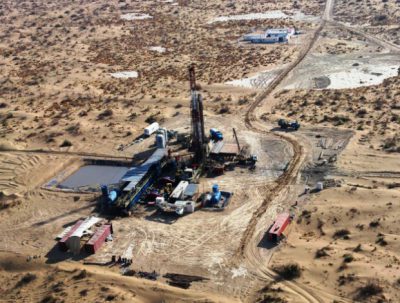 LONDON, October 8, 2020 – Oil was mixed on Thursday morning, with the approach of Hurricane Delta prompting oil rigs to evacuate in the Gulf of Mexico. But gains were capped by nagging low demand in the US, the world’s largest oil consumer, as it continues its struggles to pass its latest stimulus measures.

Delta is intensifying into a Category 3 storm, with 183 offshore facilities evacuated and almost 1.5 million barrels per day (bpd) of oil output halted in the region. The storm is the latest of several to hit the area in recent months. The Gulf of Mexico accounts for 17% of US crude output

Investor hopes that the U. Congress might pass at least a piecemeal stimulus package were revived after President Donald Trump took to Twitter suggesting packages for airlines and small businesses, as well as stimulus checks of $1,200 for individuals.

However, White House officials reiterated on Wednesday that “stimulus negotiations are off” in the aftermath of Trump halting talks between Republicans and Democrats until after the Nov. 3 presidential election.

“A piecemeal approach to US fiscal stimulus is unlikely to alter a deteriorating demand outlook for oil,” ANZ commodities analyst Vivek Dhar said in a note.

The possibility that no economic support measures will be passed was also reflected in Wednesday’s data from the US Energy Administration (EIA) showing oil demand decreased 13.2% from the previous year, highlighting the plunge in fuel demand attributable to the COVID-19 impact.

The EIA data also showed a crude oil inventory build of 501,000 barrels for week to Oct. 2. It also showed a bigger-than-expected 1.435 million-barrel draw in gasoline stocks, against the previous week’s 683,000-barrel build. Forecasts prepared by Investing.com predicted a 471,000-barrel draw.

The American Petroleum Institute (API) reported a build in crude oil inventories of 951,000 barrels on Tuesday.

“As global oil demand falters, there is increasing pressure on global oil supply to adjust lower to keep prices supported,” Dhar added. His note also forecast Brent futures to average $41 a barrel in the current quarter.