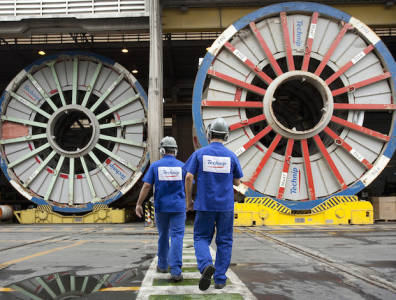 Technip profit up, revenue down

PARIS, April 28, 2016 – Technip has posted an increase in profits over the first quarter of 2016, the French company announced on Thursday. Technip reported a net income of EUR 114.4 million, a 32.9% rise over the EUR 86.1 million earned in the same period last year.

While the company saw a 7.3% rise in revenue from subsea operations, overall revenue over the first quarter dipped from EUR 2.9 billion to just below EUR 2.8 billion. “In subsea, our manufacturing plants were busy and so were our vessels on West African offshore campaigns in particular, driving a record 82% vessel utilisation rate for a first quarter,” Technip head Thierry Pilenko said. Yet order intake was down, coming out at EUR 930 million, compared with EUR 1.5 billion in the first quarter of 2015.

“Overall, we are seeing continued interest worldwide in investing, revamping and upgrading downstream, but upstream – even if we may see momentum on a few strategic developments – will be less resilient with front-end work only gaining momentum from late 2016 into 2017,” Pilenko added.