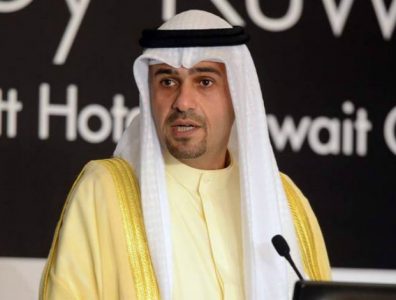 KUWAIT CITY, May 19, 2016 – Acting Oil Minister and Deputy Prime Minister of Kuwait Anas Al Saleh expects oil prices of around USD 50 per barrel for the remainder of 2016. In statements on Thursday, Al Saleh credited OPEC’s strategy as responsible for the recent stabilisation of prices.

Questioned by Bloomberg on the topic of oil prices, Al Salah said OPEC’s defence of market share “has been working well.” Yet he also noted that part of the recent price rally was driven by supply disruptions as a result of the Alberta wildfires, an uptick in violence in the Niger Delta, tensions in Libya and lower shale oil production. Nonetheless, Al Salah expects the price of oil to pass the USD 50 threshold this year. “The level around 50 is expected the price for 2016,” he said. At 11.00 am (GMT+3), WTI crude hovered near USD 48 per barrel while Brent was going for USD 48.93 per barrel.

Al Saleh was also probed about the possibility of an initial public offering akin to plans unveiled in neighbouring Saudi Arabia, where 5% of Saudi Aramco will be publicly offered as part of the kingdom’s Vision 2030. While ruling out privatisation of Kuwait Petroleum Corporation, he did say privatisation was on the table for other sectors. “For upstream and downstream, no. But on the services side, yes. We have some ideas,” Al Salah said.

For more news and features about Kuwait, click here.