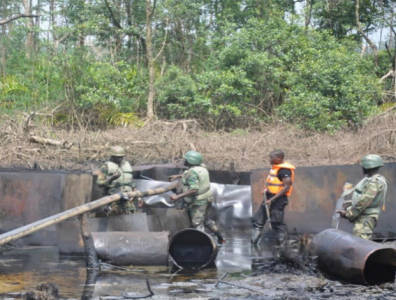 ABUJA, May 27, 2016 – Nigerian oil production, under continued threat from increased militant activity in the Niger Delta, has dropped by some 50% since the beginning of 2016, an official from the Nigeria National Petroleum Corporation (NNPC) said on Friday.

Now estimated at 1.1 million bopd, the announcement follows on the heel of another attack by the Delta Avengers, a militant group responsible for a host of attacks in recent weeks, including this week’s hit that further crippled Chevron’s operations in Nigeria. On Friday, a post on the group’s Twitter account said they had blown up a “NNPC gas and crude trunkline close to Warri” on Thursday, a claim the NNPC is currently investigating.

A stakeholders’ meeting called in the wake of the Chevron attack – the third one directed at the company in May thus far – on Thursday saw local civilian leaders sympathise with the militants, saying they were “protesting failed government policies,” the Associated Press reported on Friday. Community representatives also said the government’s heavy-handed military response could spark further retaliation and violence.

In addition to Chevron, recent attacks on oil installations have also affected the operations of Agip, ExxonMobil, Shell and NNPC.