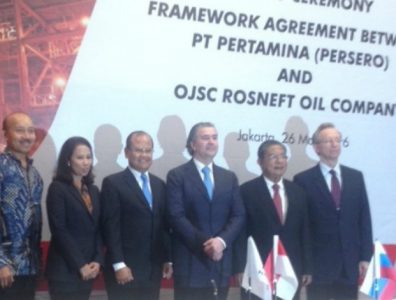 JAKARTA, May 27, 2016 – Indonesia’s Pertamina is expected to close an import deal with Iran on Sunday, a senior company official said on Friday. The agreement would see the island nation purchase crude oil and LPG. The news follows the announcement on Thursday of a co-operation agreement with Russia’s Rosneft for the construction of a greenfield refinery.

Pertamina and Rosneft will invest USD 12 billion-13 billion in the new facility, planned to be built in East Java. The Tuban refinery, with a design capacity of 300,000 bpd, is scheduled for completion in 2021, and will include a petrochemicals unit. Commenting on the deal, Pertamina president-director Dwi Soetjipto said the company could take a 55% stake or more in the venture. The company’s refining director, Rahmat Hardadi, told reporters that the plant’s output would consist of petrol (45%), diesel oil (35%) and petrochemicals feedstock (15-20%).

“We welcome the signing of the agreement. The geographical location of Indonesia, at a crossroad between two oceans, the Pacific and Indian, opens for the country the way for turning into a global transportation and energy hub which could become a critical point for global economic growth,” Rosneft chairman of the management board Igor Sechi said in a first reaction.