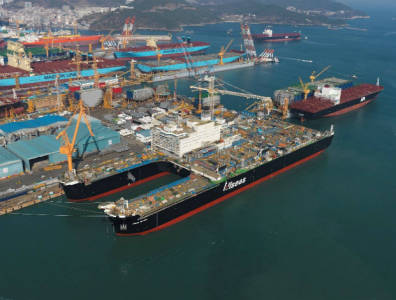 LONDON, February 5, 2015 – The International Transport Workers’ federation (ITF) has demanded the biggest ship in the world, the Pieter Schelte, be renamed. Owned by Dutch-Swiss offshore pipelay company Allseas Group, the vessel is named after the father of company founder Edward Heerema, Pieter Schelte Heerema, a former member of the Waffen-SS, the front-line combat unit of the Nazi Party’s Schutzstaffel paramilitary organisation, the. He was known for his anti-Semitism and convicted for war crimes. He served a three-year sentence in the Netherlands.

In a statement published on the ITF website on Wednesday, federation president Paddy Crumlin called the decision to name the vessel after Pieter Schelte Heerema “utterly shameful,” adding that having a vessel with that name operating in European waters “is nothing short of a grave insult.” In comments on the statement to the Dutch daily Telegraaf, an Allseas spokesperson said the company has no intention to change the name of the vessel. In a January 2015 interview with the same daily, Heerema said the name was chosen to honour his father’s achievements in the oil and gas industry. Pieter Schelte Heerema is credited for his work in developing high-capacity ship-shaped crane vessels in the late 1960s. In 1978, his company Heerema Marine Contractors commissioned the world’s first semi-submersible crane vessels, another milestone.

The Pieter Schelte arrived in the Port of Rotterdam in late-December 2014 for final assembly. It is scheduled to enter into operations in the summer of 2015, when the vessel will set sail to the North Sea for the removal of the faulty Yme platform for operator Talisman Energy. Weighing 15,000 tonnes, the platform is owned by Dutch services company SBM Offshore. Another project for the Pieter Schelte is scheduled for the spring of 2016, when it will tackle the removal of a 23,000-tonne Shell platform from the Brent field, also in the North Sea.

An ITF-affiliated group has started a petition urging Shell’s UK division to weigh on the matter, using its influence to have the Pieter Schelte renamed. A Shell spokesperson on Wednesday said the company was aware of the petition but added it had not been contacted by the ITF directly. It refrained from further comments.